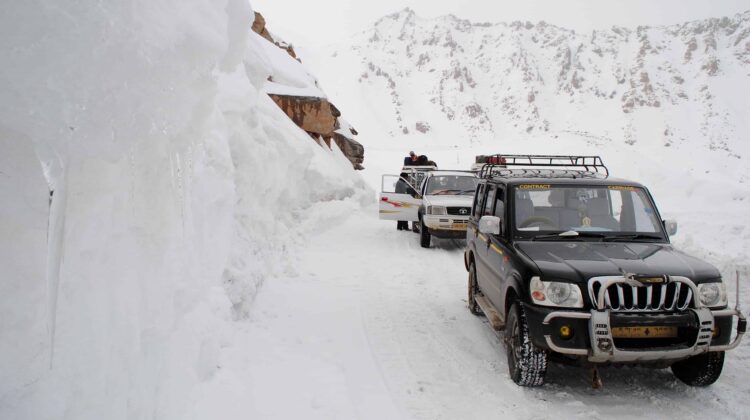 Ladakh is one of the most wanted places to be visited. Almost everyone in the country has Ladakh on their bucket list. And for those who have already visited Ladakh, they either want to go back again or never wanted to come back from heaven on Earth in the first place.

As beautiful as Ladakh is, in the winter season the season might become a bit too harsh to enjoy the stay there. But adventure junkies find winters the best time to visit Ladakh. Winter in Ladakh starts in October and continues till February. The temperature drops significantly. It starts to snow in almost all the places in Ladakh. The temperature remains at -2 degrees Celsius to -14 degrees Celsius. The passes and roads remain open only in the first week of October, even though that depends on the weather.

After that Ladakh becomes almost inaccessible. You will have to book flights from Delhi to Leh to reach Ladakh. There are other connecting flights from several other parts of the country too. The early phase of winter that is the end of September and early October is pleasant in Ladakh, with only chilly winds blowing in the evening. Around the second week of October, the cold becomes almost unbearable and impossible to stay.

Yet, it is a good time for a trip to Ladakh because there are several fun activities and beautiful places to visit.

There is no settlement or human habitat at this place. So, it is advisable for the visitors to carry their own makeshift accommodations with them like tents, hammocks, etc. Hemis National Park, as the name suggests, is home to many polar wild animals. If you are lucky enough, you might even get to see some of the animals if you go in December. Some of the species that reside here are the snow leopard, rare-shaped bharal, wolves, Pallas’ cats, ibex, Tibetan argali, and the Ladakh urial.

Kargil is known to be the second largest town in Ladakh after Leh. Kargil has one of the toughest terrains in the world with an area of over 1500 square kilometers. Kargil is at an altitude of 2700 meters and is close to the Line of Control. The place is famous for the 1999 war. Kargil is more often suggested to be visited in the months of May to august because of its difficult terrain.

But the winters add a different charm to it and it becomes even more breathtaking. The temperature of Kargil in the winter seasons goes freezing down to -15 degrees Celsius to -20 degrees Celsius.

It can change colors from blue to green to gray. During the winters the lake completely or partially freezes. With snow not only on the mountains but everywhere around you, the view is breathtaking. Pangong Tso lake is one of the main reasons why winter is the best time to visit Ladakh.

Nubra valley is known as the “Orchard of Ladakh”. Nubra valley looks barren from a distance, but this is where farming is done. It is 150 kilometers away from Leh. Nubra is famous for rides on the double-humped camels or the Bactrian Camels. The Hunder Sand dunes are also the main tourist attraction.

To reach Nubra, you have to go through the Khar dung La Pass which is known to be the most motorable pass in the world. camping overnight at Nubra is another one of the most famous activities to do. Nubra falls in the Line of Actual Control, so you will need an inner-line permit to visit Nubra. The dark mountains covered in the snow make it worth the travel in the freezing cold.

Zanskar valley is at an altitude of 1300 feet. You can witness the color palettes of nature as the place is all about lush greenery, snow-capped mountains and clear blue sky, and the lake. It is most often visited in the months of May to June. But in the winter season, the lake freezes completely. Zanskar valley is famous for trekking expeditions. One of the most famous treks is the Chadar Trek, which is also regarded as one of the most dangerous treks in the world.

The trek requires you to walk for over 100 km on the frozen lake at Zanskar. The cluttering of the frozen lake, sounding like the breaking of glass while walking on it makes it even more thrilling and adventurous.