What is the importance of Purnima vrat? 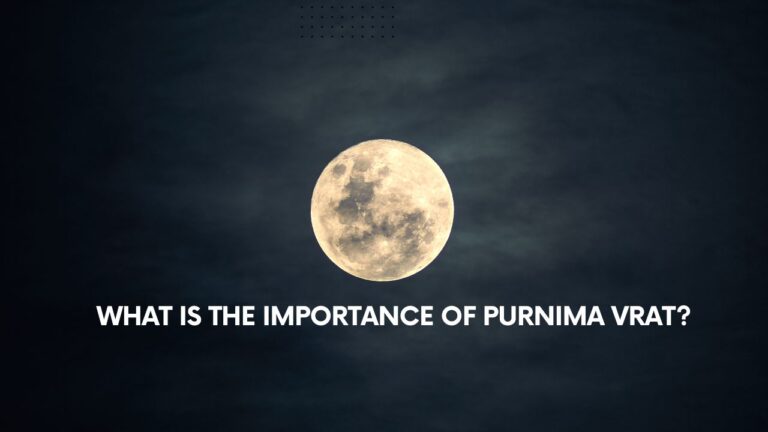 The Sanskrit word for the full moon, Purnima, refers to the day when the full moon occurs. Purnima/Poornima/Pournima can be spelled in a variety of ways and is also referred to as Purnamasi or Puranmasi. In Hindu culture, Purnima Vrat is regarded as fortunate and holds great significance. On that day, the moon is at its brightest, and people all throughout the nation worship Lord Vishnu and his avatars.

The full moon is referred to by the Sanskrit words “Purnima” or “Poornima.” The transition between Shukla Paksha and Krishna Paksha occurs on this day as well. The shining full moon in the sky represents the extinguishing of ignorance and dreariness with a blaze of insight. As a result, it is regarded as being exceedingly lucky.

Purnima Vrat is the term for the fast. For this auspicious occasion, many devotees fast either on Purnima day or the day before or on Chaturdashi, depending on the time of Purnima Tithi. In general, fasting begins at daybreak and finishes when the full moon rises.

Significance of Every Purnima Vrat

As a day of worship for Goddess Shakambari, an avatar of Goddess Durga, Pausha Purnima is also known as Shakambari Jayanti. On the day of Pausha Purnima, the tribal groups of Chhattisgarh celebrate the harvest festival of Charta. The traditional Magha snan or bath begins on Pausha Purnima, which also signifies the end of winter. Additionally, it has special significance because it occurs during the legendary Maha Kumbh Mela, a time when Hindus congregate and perform ritual bathing as part of a pilgrimage. The Pausha Purnima bath is thought to cleanse believers of all their sins and grant them their heart’s desires. The occasion of Pausha Purnima gives believers a chance to lighten their inner gloom.

Due to its dedication to Lord Vishnu and Lord Shiva, the month of Magha is one of the holiest in the Hindu calendar. Hindu mythology regards Magha Purnima as a holy day on which to carry out spiritual and religious rites. Additionally, it falls during the Kumbh Mela. On the eve of Magha Purnima, taking a bath in a sacred river is seen to be extremely lucky.

As a result, a significant number of worshippers gather along the banks of the Ganges, Yamuna, Godavari, Narmada, etc. One is freed of their past and present sins and achieves moksha or release by bathing in the holy rivers, engaging in charitable work, and giving money. Lord Vishnu and Lord Hanuman are worshipped on the day of Magha Purnima because it is thought that praying to these deities on Magha Purnima will grant the devotees’ wishes. In some parts of Tamil Nadu, a float festival is held on the day of Magha Purnima.

Holi, the festival of colors, is observed on Phalgun Purnima, the last Purnima of the Hindu calendar. Some regions of the nation also celebrate Lakshmi Jayanti on this day. The festival of Lakshmi Jayanti commemorates the goddess of abundance and fortune Lakshmi’s birthday. The Phalguna Purnima Vrat is observed on this day, and devotees are said to get divine blessings as well as forgiveness for both past and present misdeeds by worshipping Lord Vishnu and the Moon God.

Hindus view Chaitra Purnima as a chance to make amends for their words and deeds and purge their lives of bad habits. For the purpose of living a good life, devotees ask for god’s blessings. Hanuman Jayanti, the day commemorating Hanuman’s birth, falls on Chaitra Purnima as well, making both days lucky. As with every previous Purnima Vrat, believers bathe ceremonially in sacred waterways and appeal to Lord Vishnu and the Moon God for divine benefits. On this day, charitable work and monetary contributions are regarded as virtuous deeds that can atone for past and present transgressions.

According to the Hindu calendar, Vaishakha is the second month. The Skanda Purana emphasizes the importance of Vaishakha Purnima. On this day, followers of Lord Vishnu worship him and receive his blessings of prosperity, tranquility, and joy. The Vaishakha Purnima vrat brings wealth to the followers. Due to the fact that this day is also observed as Buddha Jayanti, the anniversary of Lord Buddha’s birth, it is also of significant significance.

Due to the fact that married Hindu women worship Goddess Savitri on this day, this is thought to be of significant significance. Vat Purnima is another name for this day. On this day, women are honored for their marital fidelity and purity. On this day, women also worship Lord Brahma, Yama, the god of death, and Sage Narada in addition to Goddess Savitri. According to legend, Savitri intervened when Yama seized Satyavan’s life and carried out a hard penance that made Yama restore Satyavan’s life. Satyavan is therefore worshipped on this day in addition to Savitri. On this day, married ladies who fast and pray are said to be granted a happy marriage and a long life for their husbands.

The moon is in Purvashada or Uttarashada Nakshatra on Purnima day during the month of Ashadha. When the moon is in the Uttarashada nakshatra on Ashadha Purnima, this is regarded as being extremely fortunate and auspicious, and one is said to be rewarded with abundance, prosperity, and money. Ashadha Purnima is also known as Guru Purnima, and it is a significant day in both Buddhist and Hindu civilizations. On this day, followers ask their guru and their teachings for blessings.

Hindus place a great deal of significance on Shravana Purnima since it is a day when many auspicious rites are carried out. Rituals like Upanayana and Yagyopaveet are carried out on this day. For Brahmins, this day is regarded as the holiest day to carry out the Shudhikaran ceremony. On this holy day, devotees offer Lord Shiva special prayers. Because Raksha Bandhan falls on Shravana Purnima, the month of Shravana is especially revered for its spiritual and religious significance.

Worshipers of Lord Vishnu see Bhadra Purnima as being particularly fortunate and sacred for conducting Griha Pravesh rites. Devotees pray to Lord Vishnu for the benefit of wealth and the improvement of their lives. Additionally, Bhadrapada Purnima is significant because the Pitru Paksha Shraddha starts the day after Bhadrapada Purnima.

The moon is closest to the earth on Ashwina Purnima, sometimes referred to as Sharad Purnima. As a result, the moon is at its brightest on this day, and it is thought that its light has calming and therapeutic properties. On Sharad Purnima, it is said that the moon drips the honey of eternity while being full of its 16 Kalas, or qualities. The moonlight has qualities that are nourishing to the body and the soul. As a result, Hindu households keep water in a copper vessel on Sharad Purnima or make rice kheer and leave it out in the moonlight all night. Then, this is enjoyed the following morning and even shared with family members and close friends.

Karthik Purnima is regarded as having religious and spiritual significance in Hindu mythology. The ritual bath (Karthik Snan) and worship of Lord Vishnu are thought to bring the followers great success. Because it gives joy and gladness, this day is also seen as favorable for doing religious events. The ritualistic Karthik Snan is thought by devotees to be equivalent to 100 Ashvemedha Yagnas.

The scriptures of Hinduism declare the month of Margashirsha to be lucky. On Margashirsha Purnima, it is said that young single women who take a bath in the Yamuna River would find their ideal life partner. Achieving moksha and receiving blessings of all kinds are both possible through the Margashirsha Purnima vrat. They adore Lord Vishnu with great devotion and take ritual baths in holy rivers. The moon is revered as immortality nectar. Margashirsha is regarded as the month of commitment in the Hindu calendar.

Top 10 Inspiring Hozier’s Quotes That Will Leave You Speechless