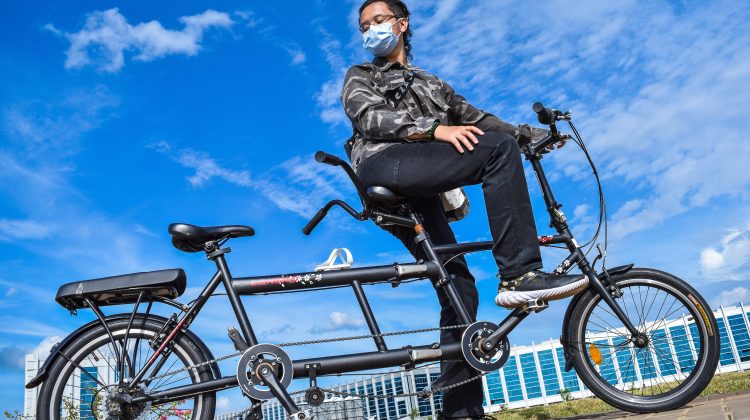 Are you looking for an adventure made for two? Does the idea of being on the road for six months send chills down your spine in a positive way? If your answer is enthusiastic yes to both of these questions, and your idea of fun includes a bicycle, why not go on a tandem bicycle touring trip? Many people across the world substituted their car for a bicycle and a tandem bicycle. If you’re also a bicycle convert and would like to see your country while touring on a bike, we’ll guide you through three stages of getting ready.

First, we’ll introduce you to the benefits of riding a tandem bicycle. The second part will cover the preparation, and lastly, we’ll discuss how you and your cycling partner can survive the six months on the road.

What is a tandem bike?

A tandem bicycle is a bicycle that can accommodate two riders. One known as a captain or the pilot sits in front and controls the bicycle. The second person, known as a stoker, follows the instructions of a captain, helps with pedaling and is one hundred percent focused on keeping the bicycle balanced and steady. The stoker is also free to read a map, provide directions, take photos and videos of beautiful scenery. Also, they’re the ones giving the necessary pedaling power when starting, climbing up a hill and giving the boost of pedaling power when the captain needs it.

Why is a tandem bicycle a great choice?

Riding a tandem bicycle is a team activity. There are two riders and both have a role in keeping the bicycle safe, steady and fast. The person who takes the front seat is the captain, while the stoker sits in the rear seat. They can switch sides, but with it comes different responsibilities.

One bicycle, two seats and two tires. If it breaks down, you only have to maintain it. In comparison to riding on two separate bicycles, there are two bicycles to maintain and fix. So, you’ll only have to keep a spare part for one bicycle and it will take you less time to keep everything in check when you have a tandem bicycle.

A tandem bicycle is faster than two separate bicycles. People who ride tandem bicycles report riding up to 30% faster than on a regular bicycle. This comes as no surprise because it takes two people to pedal which increases its speed. Even though riding up a hill is a bit difficult on a tandem bicycle, it’s still a faster choice if you ride as a couple.

A tandem bicycle is lighter than two bicycles combined. Well, this is quite logical because there’s only one set of everything, while seats come in a pair. On average, a tandem bicycle is six kilogrammes lighter than the combined weight of two separate bicycles. Also, there won’t be a need for two spare parts for everything because you’ll only have to fix one bicycle. So, you will also travel lighter and you’ll also pack lighter.

Yes, you might have to shout at times but communication will flow significantly easier. Whether the captain has to say something to the stoker, or the stoker to a captain, it will be easier to get the message across. Not only that, but the person listening, won’t have to take their eyes off the road while taking in the message.

6. You arrive at the same time

You won’t waste any time waiting for the other cyclist to arrive when you’re both seated on the same bicycle. Even if one of you is weaker than the other, you’ll help each other, not be slowed down by a weaker rider.  Most importantly, you’re not competing against one another, you’re in it at the same time.

A tandem bicycle is more efficient due to its aerodynamic properties. The aerodynamic drag can slow down a regular cycler, while tandem cyclists are less affected by it.

8. The weaker rider can rely on the stronger rider

You don’t have to be of equal strength to enjoy a tandem bicycle. That’s why it is a great option for couples who want to ride together and share the effort. Just find a tandem bicycle that is suitable for your strength, endurance levels and share the enjoyment. When one needs to go lighter, the other one can take over.  It’s a team effort.

How to train and get ready for a tandem bicycle tour?

Before you even take it around the block, you need to get familiar with its basic maintenance. It’s sufficient if only one of you is familiar with the mechanics needed to fix a problem. The other one can take care of other things and help you in that sense. But, you might be in a situation on the road so it’s safer for you to learn how to fix a problem.

Riding a tandem bicycle is not as difficult, but it isn’t as easy as riding a regular bicycle. You have to learn how to coordinate your movements to make riding a tandem bicycle a safe and pleasurable experience. It’s longer than a regular bicycle, so you’ll have to get used to it. Turns are also a challenge for the inexperienced because you have to do it safely. You’ll also have to master how to hit the brakes, stop safely, slow down or pick up the speed when needed.

When you get confident in your basic maintenance, riding and communication skills, it’s time to go on a test tour. While you’ve just been practicing around your block, now’s the time to hit an open road. You should test your tandem bicycle by riding to the nearest town. You’ll test your stamina, strength and you’ll recognise the areas you still need to work on. Don’t go too far because it might take longer to get someone to come for you if you encounter a problem.

This is also your chance to test your roles and divide the work. Since this is something you’ll do on your six-month tour to preserve energy, start practicing as soon as possible. Test how you ride when the captain is just steering and the stoker is cycling and vice versa. You should also test your navigating skills so you’ll safely rely on these later on. While the captain is pedaling, the stoker can read the map and give instructions to the captain.

How to survive six months touring on a tandem bicycle?

1. Invest in a good tandem bicycle

Six months is a long time to be on the road, so it’s imperative to buy a reliable tandem bicycle. Do your research and find the one that fits your requirements. By now, you’re already used to riding a tandem bicycle so you’ll know how to test each one you consider buying. Look into their characteristics with great detail to invest in a reliable and easy to maintain a tandem bicycle.

You need to decide which one of you is great in the front seat and the rear seat. Both of you can change roles, but it’s best if you decide who’s who so you’ll have time to practice. Even if you’re both equally strong and skilled cyclists, you should still separate your roles. This will help you coordinate and work on your communication during the ride.

You have to make room for the spare parts and pack your stuff. But, you’ll have to pack light if you want to be as efficient and fast as you want. You’re advised to have two panniers or four and distribute the load equally to maintain the balance. Also, you should consider transporting your bike on a plane or a train, so you still have to plan your load carefully.

4. Prepare yourself to deal with the obstacles

You have to prepare mentally for possible obstacles. Even if you plan your route in nitty-gritty detail, you’ll still make the wrong turn or have to ride over difficult terrain. The most important thing here is your approach and your mindset. It will be difficult at times, but every crisis is there to make us stronger and better prepared for the next obstacle.

You might need to maneuver, move and rearrange your bike to fit the storage or parking area. It’s because it’s longer than a typical bike and parking might be difficult. There are two of you, so coming up with a solution won’t be a problem. Also, combining your strengths to lift, move or squeeze

your bicycle anywhere will be easier.

The key to surviving on the road for six months is in knowing where you’re going. Sit down and plan your route kilometer by kilometer. Do your research to find detailed reports from other people who took that route before. Find out if the road is cycle-friendly or not. Get all the necessary maps and learn how to read them to avoid making wrong turns.

7. Plan your breaks and lodging options

Besides planning the route, you need to plan your daily breaks and nightly stays. So, put each break and stop on the map as well. Calculate your budget carefully so you’ll have enough money to give yourself quality resting stops. Find each motel, hostel or hotel on the internet to check what services they offer from laundry services to mechanical services, or at least if that stop offers one nearby. Use your breaks to update your plan and map.

If you’re ready to take your relationship to another level and go on a tandem bicycle tour, start practicing. Once you get confident in your tandem cycling skills, you can plan the trip, your route and take off on an adventure. Don’t forget to invest in proper safety equipment as well and your tour will be a safe and enjoyable adventure.