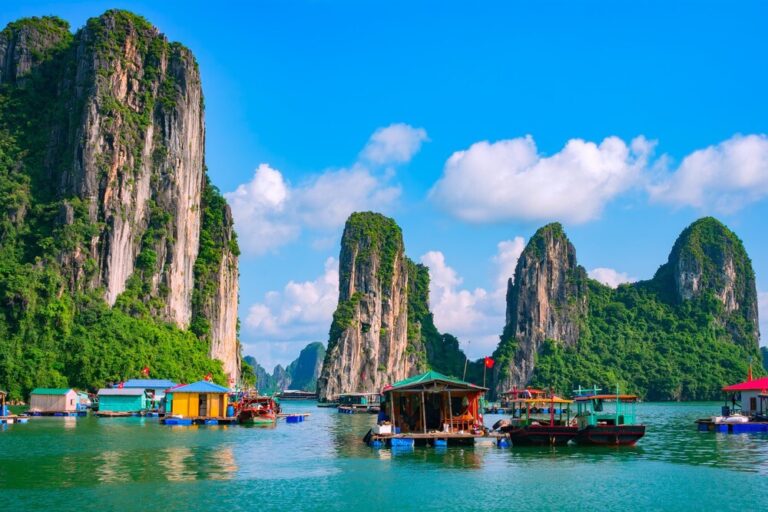 It will be expensive if you think of traveling to Europe and America. In fact, even in Southeast Asia, there are too many beautiful places for you to explore forever without getting bored. It has many famous landmarks and attractions that attract many tourists around the world. Find out the top 7 most popular tourist destinations in Southeast Asia below.

Not as bustling as Kuala Lumpur, Penang has a quiet and peaceful beauty with many imprints on the history and culture of Malaysia. In particular, the old town of George Town is one of the places in Penang honored to be recognized by UNESCO as a World Cultural Heritage since 2008. Coming to Penang, you will discover many famous monuments such as the castle. Cheong Fatt Tze, Pinang Peranakan villa, Fort Cornwallis, etc. In Penang you will be quite impressed with a series of blue houses, ancient temples, beautiful beaches, etc.

Of course, in Malaysia, you can not only discover the beauty from Penang but also have many other interesting places such as: Kuala Lumpur city, Cameron Highlands, Langkawi Island, Johor Bahru, … Don’t miss the popular cultural festivals such as: Vesak festival, Traditional New Year, Deepavali light festival, Hari Raya festival, etc. In addition, you can also spend time shopping, stopping by. traditional markets, have fun at entertainment spots, visit ancient villages, etc. There are many souvenir shops with affordable prices, you can easily find discounts, discount codes, coupons when buying souvenirs, because that’s how the people here attract tourists.

Referring to Indonesia, of course, everyone will immediately think of the paradise island of Bali. This place has 17,000 large and small islands, converging a diverse number of marine lives, beautiful coral reefs, … Bali is also famous for a series of terraced fields, a colorful culture. Along with that, there are hundreds of beautiful beaches like paradise, with many impressive resort services. In particular, you will discover famous temples and pagodas such as Butuan Temple, Titha Empul Temple, Tanah Lot Temple, Ulun Danu Temple, Uluwatu Temple, …

In addition to the city of Bali, Indonesia is also known for many other famous places such as: Dieng plateau, Yogyakarta ancient city, Baliem valley, Komodo national park, … Many ideal destinations for you to visit You can freely visit and check-in virtual life. Indonesia is also very famous for its culinary culture with many attractive dish’s worth enjoying such as: Satay barbecue, Bakso beef ball, Nasi Uduk coconut milk rice, Rendang, …

The core area of Ha Long Bay was recognized by UNESCO as a World Natural Heritage in 1994 with its aesthetic value and was re-recognized for the second time in 2000 with its outstanding global geological and geomorphological value. Ha Long Bay is a part of the western part of the Gulf of Tonkin, including the waters of Ha Long city, Cam Pha city and part of Van Don Island district. Ha Long Bay has an area of ​​1,553 km2 and 1,969 large and small islands, of which 989 islands have names and 980 islands have no names.

Ha Long Bay is a strange shape of the Creator, a combination of sculpture and assembly, a harmony and flexibility between layout and color, between shape and space… represented by rows of rows. thousands of islands on the emerald green sea, shimmering. Both majestic, healthy, graceful and poetic. The rocks are scattered like a park in the sea. The different shapes like the “deliberate” hand-arranged hands of the Creator evoke the limitless imagination of people. Ha Long Bay will forever be a destination that attracts visitors because of its unique and strange architectural features that are hard to find anywhere in the world. Ha Long Bay will always be the pride of Vietnamese people to friends in five continents so that Vietnam will be a destination attracting world tourists.

Bangkok has been a small trading street since the 15th century. It is because of the convergence of so many beautiful features of culture, nature, and cuisine, that this place quickly became the capital of Thailand and is known by many tourists. arrive. Most of the first places that people think of in Thailand are Bangkok. Coming to Bangkok, you will learn about the lifestyle of more than 8 million people. That is best seen through the floating markets, river restaurants and unique festivals here.

The next interesting thing in Bangkok is the historical buildings and ancient temples, where you can find both architectural and cultural beauty, that is: Temple of the Emerald Buddha, Thai royal palace, pagodas Gold, the ancient capital of Aytthaya, etc. If you want to experience entertainment activities, then go to Dream World, Asiatique the Riverfront, etc. In addition, do not miss the opportunity to shop at famous places such as: Chatuchak market, Rot Fai market, Khlong Lat Mayom market, Pak Khlong Talat market, Amulet charm market, etc.

Myanmar is known as one of the top tourist paradises in Southeast Asia. In particular, the first prominent place to mention is Bagan (Burma). This is a place recognized by UNESCO as a world cultural heritage because of the convergence of many ancient temples up to more than 2000 years old such as: Shwezigon Pagoda, Sulamani Temple, Htilominlo Pagoda, Tantkyitaung Pagoda, … When you come to Bagan, you will immediately think of giant hot air balloons flying in the sky.

In addition, when traveling to Myanmar, you will also have the opportunity to explore many other famous tourist attractions such as Ngapali beach, Inle lake, Ngwe Saung, U Bein bridge, Bagan ancient capital, Mandalay palace, … With that is a series of traditional festivals typical of Myanmar people such as: New Year’s water festival, Thadinhyut light festival, Waso full moon festival, Htamane sticky rice cooking festival, Ananda temple festival, etc.

Known as a prosperous and bustling capital of the Philippines, Manila is also a popular tourist destination that many tourists do not want to miss. Coming to Manila, you will admire the skyscrapers, dozens of bustling entertainment areas. Manila is the place that makes you overwhelmed by a life of luxury, charm and infatuation. It is also the leading political, cultural, social and educational center of the Philippines.

Not only stopping there, Manila is also the pride of the Philippines in terms of history and culture. That is found through ancient architectural works such as Fort Santiago, Marikina Shoe Museum, Intramuros Ancient Citadel, etc. Along with that, there are many beautiful islands such as White Island, Vanishing Island, Kalanggaman Island, Buntod Sandbar, etc. Halabang Papis Reef, … In addition, the Philippines is also very famous for many other tourist attractions such as: Cebu City, Bananue rice terraces, Mount Osmena, Badian waterfall, …

Surrounding Angkor Wat are many lush gardens, sparkling lakes and many special architectural highlights. Coming here, you can not only visit the architecture but also freely take dozens of beautiful pictures. In addition, Cambodia also has many other famous tourist destinations that you cannot miss such as: Phnom Penh city, Banteay Chhmar temple, Sihanoukville, Sambor Prei Kuk, …

Southeast Asia is famous for many great tourist attractions with heavenly views that make you swoon. Moreover, the price is very cheap, there are many promotions, discount codes, coupons when traveling in Southeast Asia. Above are the top 7 most famous tourist destinations in Southeast Asia. If you have the opportunity, come visit to learn more about the country and people of the countries in the ASEAN community. Surely you will find it interesting and attractive

Why Should You Consider Having a New Shipping Container?

Tips for traveling to Cancun