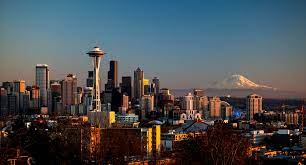 Seattle is a unique city in the USA, which has many qualities. A city like this has many benefits. In addition to its natural beauty, the city is also rich in cultural treasures. Seattle is in the middle of mountains, which glory this city’s beauty. The culture is also vibrant. These qualities made this city an excellent place to live in. When you decide to move and live in Seattle, the first question that comes into mind is about the cost of living in Seattle. By reading this article, you will get information about the cost of living in Seattle.

Before knowing the cost of living or moving to Seattle, you must have a basic understanding of the city. In the following section, you will learn about the advantages of living in Seattle.

The good news is that Washington does not have a personal income tax. However, in 2017, the Seattle City Council passed a tax on high earners that is now the subject of fierce controversy.

Washington was recognized as the best state in 2019 by U.S. News & World Report, ahead of New Hampshire & Minnesota. Niche.com named Seattle the third-best city for young professionals in 2019, the second-best city for outdoor pursuits (behind Portland, Oregon), and the seventh-healthiest city in the nation.

One hundred miles south of the Canadian border, in the northwest U.S. state of Washington, Seattle is a stunning port city on the Puget Sound.

Seattle, the largest city in the state (as well as the Pacific Northwest), is richly endowed with rich natural resources. It boasts both freshwater & saltwater, hills, grasslands, mountains, and forests—absolutely stunning!

Due to its mountainous terrain, lush green forests, & playgrounds, this city got the moniker “Emerald City.” The name was given due to its campaign to spruce up the city with seasonal flowers further. The fact that there are so many cruise companies departing from Seattle with an Alaskan destination lends credence to the nickname “Gateway to Alaska.”

Advantages of living in Seattle

Seatle, with all his beauty, attracts a lot of businesses. Business people love to establish their business in Seattle. So, Seatle has a very healthy job market due to this trend. In this city, there are cameras and job opportunities. The inhabitant has not to worry about getting a job. The job offers a healthy income for job seekers. Most job opportunities are in technology because Seattle is a growing tech hub industry with many accomplishments yearly.

Because this city is situated in such a place with plenty of natural beauty with the latest facility, people worldwide want to come and live in this city. As a result of this behavior of people, many food providers and art lovers come and live in Seattle.

Cost comparison from other American cities

You will look at different aspects impacting Seattle’s cost of living.

Cost of living in Seattle

This section explores each aspect that directly or indirectly affects the cost of living in Seattle.

Cost of residence in Seattle

As you read in the introduction that this city is a tech hub. So many high-earning professionals are coming to this city, which automatically increases the renting and buying cost of the house. The average rent of an average home in Seattle is two thousand dollars to three thousand dollars. While if you want to buy an average house, you must pay 400,000 to 500,000 US dollars in Seattle.

The average ticket cost for a single adult in Seattle is two to three dollars. Compared to the price of the finite pocket of the capital of the USA, this is the exact transportation price. The ticket price in Seattle is higher than in LA. Most inhabitants prefer to have their transport vehicle to move around the city. Due to this trend, the city’s traffic problem increases daily. You have to pay three to four dollars for one gallon of fuel if you own a car.

Food is an essential part of everyone’s life. The prices of edibles are different in every part of the USA. Now you will have an idea of the price of rice in Seattle. If you want to get a bottle of milk in Seattle, you must pay the shopkeeper two and a half dollars. The price of bread in the city is 6.66 US dollars per kilogram.

Similarly, the price of 12 eggs is approximately 2 dollars. The cheese price in Seattle is five dollars, and steak comes at fifteen dollars. The coffee cost is six dollars. These are the prices of some essential edibles to give you an idea about the cost of food in Seattle.

Busy roads, the port, and the airport

Seattle-Tacoma International Airport, sometimes known as Sea-Tac, is the ninth busiest in the world in the United States and is served by 31 airline passengers. The Port of Seattle runs this 80-gate airport, which handled nearly 8 million travelers last year.

Alaska and Delta are its busiest passenger airlines. The Port of Seattle controls heavy freight container services in addition to providing services to the cruise industry, making it a hub for regional trade. I-90 and I-82, two main interstates that service the city, are under construction this time of year. I-5 and I-405 are regularly congested with southeast traffic, running (or stalling). The transportation network can get you where you need to go, but maybe not as quickly as you’d want.

It is challenging to expand the roadway network in this bustling city, the 20th largest in the United States, which is surrounded by mountains, hills, and water. Urban planners are constantly seeking better mass transit options to reduce inescapable traffic.

Seattle, which has a community of over 700,000, draws millennials, older and younger career workers, and those who enjoy the outdoors. The city is a center for the scientific, medical, technological, and educational disciplines, and innovation and variety are gaining prominence.

There are a lot of Native Americans and people who are of Scandinavian, African, and Asian descent living there. The LGBTQ community in the city is expanding.

Living in Seattle won’t make you bored. There are many things to do and see, many of which have ethnic influences for added appeal.

You can go to South Park for delectable Latino food or the International District for real Asian food. You can find seasonal outdoor sports and cultural festivals for a leisurely outing or challenging adventure.

The year-round appeal of a moderate climate

Everyone can find something to enjoy in this hilly city’s temperate climate, waterways, beaches, highlands, & forests. It is a rainy city with only an average annual rainfall of 38 inches.

Given that it is equal to the national average, it appears normal; yet, because half of such rainfall falls in November, December, and January, these months have a reputation for being particularly rainy. Statistics show that Seattle residents typically see some precipitation on 155 days yearly.

But it’s not all rain. Every year, there are about 152 bright days to look forward to. It’s not excessive — 205 sunny days per year is the national average — but maybe even more appreciated as a special gift.

Less than 7 inches of snow are normally expected each winter. That’s hardly much snow for a northern state to deal with compared to the world rate of 28 inches per year; it scarcely justifies buying a shovel! You can quickly reach the mountains if you love snow to take advantage of the snowstorm and winter weather sports.

Who resides in Seattle, Washington?

Locally dubbed as the “Seattle Freeze,” Seattleites have a terrible reputation for being unwelcoming to strangers, which makes it challenging to meet new people there. The majority of locals, though, will scoff at the notion of the frozen and advise you to meet others who have similar hobbies to your own.

In comparison to other cities, Seattle has fewer families with young children. When families reside here, they frequently do so outside the city’s core.

The proportion of single people in the Seattle area is almost identical but somewhat lower than that of married people. The region’s population is made up of trim under a quarter of people under 20 and more than a quarter of people between the ages of 45 to 64.

After reading this article, you should clearly understand what it costs to live in Seattle. Keep these expenses in mind before moving to Seattle. Please note that these are only approximate living costs in Seattle; a professional should determine exact costs.

How much monthly income do you need to live in Seattle?

If you earn about seventy thousand dollars in Seattle monthly, it is enough to meet all your megacities for the whole month, including everything.

Do you think living in Seattle is expensive?

Apart from this if you are interested to know more about The Best places to visit in Punta Cana then visit our Travel category.

The Best places to visit in Punta Cana

Why Beachfront Rental Homes Are Recommended For Family Vacations?