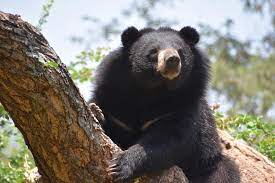 In fairy tales, the bear often appears as a powerful, but good-natured bumpkin, who is easily deceived by a fox, a hare, and other forest dwellers. If there were gambling in fairy tales, you could tell for sure that bears would never play them and foxes would be the owners. If you would like to become a real fox and test your luck join 22Bet live sports betting.

Real bears are way different from fairy tales. They are strong, quick, and witty. It is better not to test your luck meeting the bear.

The bear makes the choice of a place for the construction of a den thoroughly. The beast chooses in advance a hard-to-reach place where no one will find and disturb him. It should be dry, and quiet here, and the entrance to the future lair should be well covered with snow.

Lairs rarely serve more than one year during the spring waters and summer rains wash away the earthen ceiling and it collapses. However, in some cases, bears use one den for several years. Then they take measures so that uninvited guests do not settle here. For example, they arrange a bedroom around the corner, where it is simply scary for a stranger to look because of the risk of stumbling upon the owner of the lair. There are cases when bears used abandoned cars, old churches, houses, and comfortable rocky crevices as lairs. Interesting that the bears insulate such lairs with grass and branches, trying to improve the comfort of their winter housing.

Bears are known to be omnivores. Their diet includes herbs, roots, nuts, berries, honey, ants, lizards, birds, and their eggs, fish, and large mammals. In order to get such varied food, these animals have to show remarkable mental abilities, for which many naturalists call bears the intellectuals of the taiga.

Bears follow the movements of ungulates, remember the places where it is easiest to attack them. For example, in the mountains they wait for sheep on narrow paths, sitting in ambush behind a bend or a large stone.

Despite their size and strength, bears, which are mainly endangered by people, behave cautiously in nature. Before going out into the open, the bear stands still, sniffing and listening. Bears try to raid hunting traps or apiaries at night or early in the morning when the chances of encountering a person are low. According to some reports, bears, like wolves, foxes, and other forest tricksters, can confuse their tracks, especially when they go into a lair.

Bears are amazing animals. There are some facts when people and bears live together. But don’t forget that these animals were born to be wild!